“Uncle Barbz!”, my son was very surprised to see him after so long.

“Hello kid, how are you?”, Barbz was even more happier. My son hugged him so tight I could see Barbz grimaced.

“I am fine, uncle. How are you? Where have you been? It felt like forever since I see you. I miss you!”

“Haha! I miss you too. I am surprised. You look like a soldier now!”, Barbz complemented my son in his school uniform. I agreed. He looked like a little soldier.

We were in the station’s green house or the park if you would call it where my son’s school was located. We were sitting on a bench that dotted the walkway that cut the park snaking into some distance. The park was indeed huge. People, couples, old and young were strolling or just chatting and enjoying their packaged lunch.

“You promised to take me on one of your adventure uncle”, my son asked Barbz. To him Barbz was his hero and it suited him because he liked to tell stories of his exotic and dangerous encounters with criminals and pirates. My son adored him.

“Right. And a promise is a promise. Could we take him for a trip across some systems, buddy?”, Barbz asked me.

“I wish we could. But he can only leave during the end of his term which is next year”, I said. In my heart I agreed with the idea, it would be very nice for us to travel and relax, especially with Barbz around. I would never know when he could visit us again.

“Do you hear that kid? I tell you what, I will see you again next year and that time I will take you to visit some places where legendary battles took place. You will like it”.

“Really, Uncle? I can’t wait to go there with you. Natasha won’t believe me if I tell her…”.

“Well, well, who is Natasha? Is she your girlfriend?”

“Haha! No, uncle, we are just friends. She is the most brilliant student in our class. You know uncle, she can calculate the movement of ship in space by heart without any device or manual calculation… and…”

And there we were. Both Barbz and my son tried their best to spend the short lunch break to catch up as much as possible. I was happy to see them bonded like uncle and nephew.

Late in the evening I and Barbz were mining in one of asteroid belts. I was in my Skiff and he was in his Retriever. Our drones were flying around guarding the area from possible sleepers or pirates.

“Yes it is. I am amazed you know this spot. It is a very good one”, I said. The spot was not too far from trading hub but somehow it looked like some quiet remote place and there was nobody else beside us.

“I used to go to this place, park the ship and just be with myself, thinking about universe’s biggest mystery”, he said in poetic tone.

“Haha, really Barbz. Were you really alone in your ship? No exotic dancers?”

“Of course I was alone. All those exotic Gallente dancers made me bored. What I need was my ship AI to discuss life’s most difficult mysteries. Do you want to know more about it, buddy? I still remember that discussion. It got ‘heated’ nicely, if you know what I mean”.

“No thank you. It will be too much info, Barbz”, we laughed.

Then we both went silent. We were watching the yellow mining lasers quietly cut into the asteroid and the blue tractor beam sucked the pulverized rock into our ship’s ore cargo. We could hear a faint humming sound from the ship’s compressor storing the ores and the occasional beeps from the computer. It was a slow rhythmic process, repeated over and over again. Somehow the whole thing was very soothing. It gave peace to the mind.

My thought went to my encounter with the Pope. What an admirable figure. I really hoped he would be successful in His holy endeavor.

“The kid needs his mother, buddy….”, said Barbz suddenly and his statement caught me unprepared. It took me some moment to respond.

I closed my eyes and took a deep breath. I was not sure if I should or could talk about it with Barbz. I considered it as very personal.

“Listen buddy. You could fool everyone but not me. I had noticed it the moment she died. I didn’t ask you earlier because I thought you would talk about it with me. But after all this time you keep it for yourself and it is not good. Not when I know what you had been through”, he said. And what he said was true.

“I don’t know, Barbz. It’s really difficult for me to talk about it….”

“But you must. For your own good and your son”.

“You know, Barbz, he kept asking for his mother. He was 5 at the moment and even though he got some grab on the concept of death, he could not accept that her mother as capsuler would die. All he knew that capsuler was immortal. It took him a year to finally accepted that capsuler may still die”.

“Have you accepted that?”

“Of course I accepted that, Barbz. But…”

But did I accept the fact that it was my wife that died? Deep in my heart I must admit that I was depressed ever since she’s gone. But I had been trying very hard to deny and suppressed it. I kept telling myself to be strong for my son. And I thought I succeeded. But now that Barbz said it I realized perhaps it was not so successful after all.

“Barbz… I…”, I could not finish it. Suddenly a lot of emotions surged through myself. Sadness, anger, madness, denial, and… finally hopelessness.

“Barbz…. I miss… her so much…”, I almost could not finish the sentence.

We were silent for a long time but I knew he was listening to the comm intently waiting for me to continue. He was such a good listener and a great friend.

“You wouldn’t know how many times I went to the place where she was killed, cloaked in my ship and patiently waiting, hoping that the killers would somehow appear there again so that I could avenge her”.

“After weeks they never showed up, I stopped doing that and continue my mining and mission runner activities again, but so many times I wished that I would get into a skirmish, get killed and my clone failed”.

“And..”, I stopped. I hesitated whether I should tell him that there were few close-call moments when I almost did something out of capsule that I knew it would end all of my sufferings.

“I almost killed myself few times, Barbz…”, finally I said it.

“I felt so hopeless. I didn’t know the purpose of my life anymore. I miss her too much…”

“Listen buddy”, Barbz said in a calm but firm voice.

“She’s gone and it is not just you who miss her. Your son does too, and me”.

“But do you think she would be happy if you did that? I don’t think that was what she wanted. She would want you to be strong and be a good father for your son. The only parent that he has now. I know that you appointed me to be his guardian if something happens to you. And I want to assure you again that I will take care of him as my son. But not because you cause harm to yourself”.

“I cannot and should not tell specific what you have to do. I can just give you a bit of different perspective of view so that you can find a way to put yourself together again. But whenever you are feeling down, DO NOT MAKE A PERMANENT DECISION FOR A TEMPORARY PROBLEM!”, Barbz said in an even firmer tone.

“For example… hmm… walking to the hangar without your oxygen mask. That would be very silly. I’m afraid I would be sad and laughing at the same time if you die because of that, buddy”, Barbz couldn’t hold his laughter and we both laughed our heart out for a minute.

“Thank you so much, Barbz. I don’t know what I would be without you. You saved my life once in an asteroid belt from pirates. And now you have just saved my life again here in another asteroid belt. All of that before I have a chance to return the favor. I am indebted to you forever”, I said.

“Don’t mention it, buddy. I will always be here for you. We are family. Well, on second thought perhaps you could treat me drinks and some exotic dancers. Haha!”, we both laughed again. I felt like a heavy burden had been lifted off my shoulders. I could start feeling the joy of raising my son again. I began feeling the excitement of traveling to distant stars for adventure and exploration again. And… when I looked outside to the countless twinkling stars I could see my wife smiling at me.

“Thank you for always be with me inside my heart… I love you…”, I whispered feeling relieved and grateful. 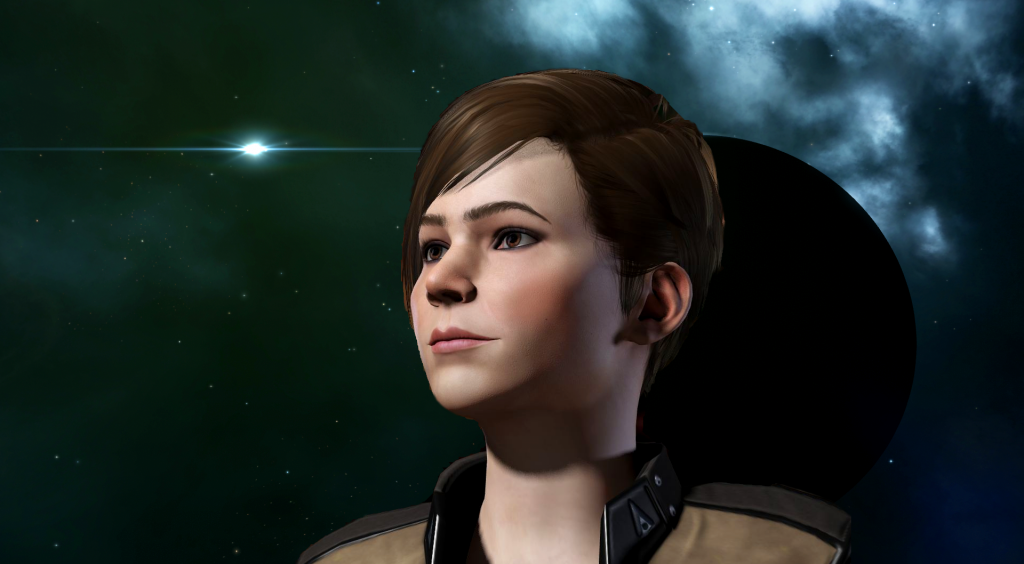